We offer a number of charter cruises from day trips to week long charter holidays on the UK South Coast.

The Dorset coast is a magnificent English spectacle of chalk cliffs and rolling green hills. Portland juts into the Channel like a giant lizard and Weymouth is a classic seaside town with a snug marina above its bridge. Portland harbour was once a naval base, but its vast acres are now devoted to leisure boating. The sailing Olympics will be raced here next year at the National Sailing Academy. But few cruising folk know about Dean & Reddyhoff’s Portland Marina, with its first-class facilities and visitor pontoons – the perfect start to a Dorset weekend, with supper in The Boat that Rocks, where there’s a lively, salty atmosphere and good food. Saturday morning A period with lunchtime HW is good for fast boats. Leave the marina 3½ hours before high and follow the east side of Portland close round the lighthouse near slack. The west side feels suddenly secluded and it’s fascinating to hug the coast past the shingle miles of Chesil Beach and the hills beyond Abbotsbury. After two conical peaks near Swyre village, you soon reach the fantastic gold Jurassic cliffs just before West Bay harbour. Inside the jutting piers you can moor alongside a visitors’ pontoon to port. Then wander up for superb fish and chips at one of the many kiosks around the colourful inner basin.

Saturday afternoon If you feel active, it’s fun to cruise another six miles west to Lyme Regis, a charming timeless harbour with the jumbled layers of its historic town winding up the hillside. Although the harbour mostly dries, there’s a visitors’ pontoon in the pool off Victoria Pier, west of the pierhead light – a delightful spot in quiet weather. You can walk ashore past Lyme’s famous Cobb, the original quay with its old fishing sheds (one of them now an aquarium). The French Lieutenant’s Woman was famously filmed here, with Meryl Streep gazing forlornly seawards. You’ll just have time for ice creams or a Dorset cream tea at the Beach House Café, before heading back towards Portland to catch afternoon slack water round the Bill. Saturday evening Following Portland’s east shore towards Weymouth, you arrive off the popular Esplanade and its holiday sands. With a friendly and bustling atmosphere, Weymouth is a good spot for your Saturday evening. Just inside the pierheads, huge Channel Island fast ferries squeeze alongside. Beyond the sailing club and a row of local moorings, the south bank curves into the picturesque Cove and its handy pontoon. Over on Custom House Quay is the 18th Century red-brick harbour office.

The stunning Dorset coastline is a truly English spectacle of chalk cliffs and rolling green hills, its Jurassic strata dramatically exposed millennia ago by a quirk of shifting landmasses. The finest way to see this magnificent shore is by boat, any kind of boat, and on quiet summer days many visitors do just that – in graceful sailing yachts, glitzy motor yachts, fast speedboats and, in really calm weather, kayaks or canoes. The Isle of Portland is centre stage in this seascape, jutting four miles out like a giant lizard to stir the Channel tides into a notorious race of rough water.

Locals know the Dorset coast is splendid, but the Olympics put it firmly on the world map. Weymouth and Portland National Sailing Academy is a recognised centre of excellence and Portland Marina a perfect base both for day cruising and exploring further afield. Not far east of Portland you can enjoy fabulous anchorages at Lulworth Cove, Worbarrow Bay and Chapman’s Pool. Larger boats can easily cruise round to Poole Harbour, a delightful boating area in its own right. More experienced boaters can edge round Portland Bill at slack tide and follow the coast westwards to Bridport’s timeless West Bay harbour and charming Lyme Regis. And Weymouth harbour itself is a colourful port-of-call, with snug moorings in the heart of town.

Leaving Portland Marina, you come out through the north entrance into the glorious expanse of Weymouth Bay, with white cliffs folding east towards the curious natural arch known as Durdle Door. Seven miles east of Weymouth, Lulworth Cove is a geological showpiece, a classic horseshoe inlet nibbled into the soft limestone strata of Bindon Hill. Its narrow entrance can be tricky to spot, but inside the shy gap you can anchor in magical surroundings. On a warm summer day Lulworth is just right for lazing and swimming, a sun trap where the shallow water warms up easily. Landing on the beach, make for the Lulworth Cove Inn for a pub lunch. 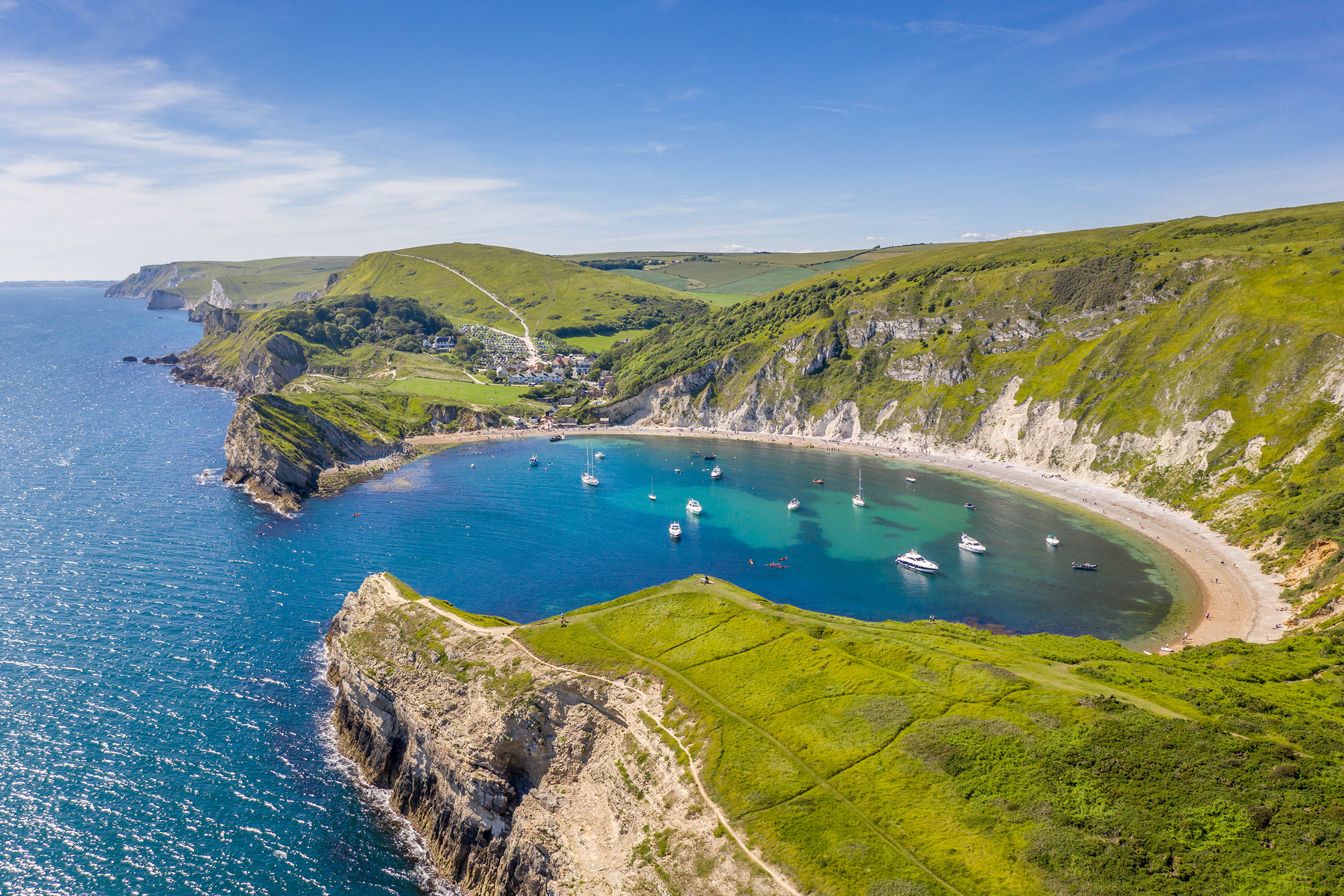 A mile east of Lulworth, Worbarrow is backed by a majestic sweep of cliffs. In north-westerly winds anchor at its west end in Mupe Bay, inside a sheltering ledge of rocks. With a north-easterly the east side of Worbarrow is best, behind the distinctive promontory called Worbarrow Tout – nowhere like Dorset for quixotic place names. Worbarrow is one of the historic English Channel anchorages. In the late afternoons, low light starts etching theatrical shadows into those layers of bold Dorset chalk and this coast looks the finest in the world. 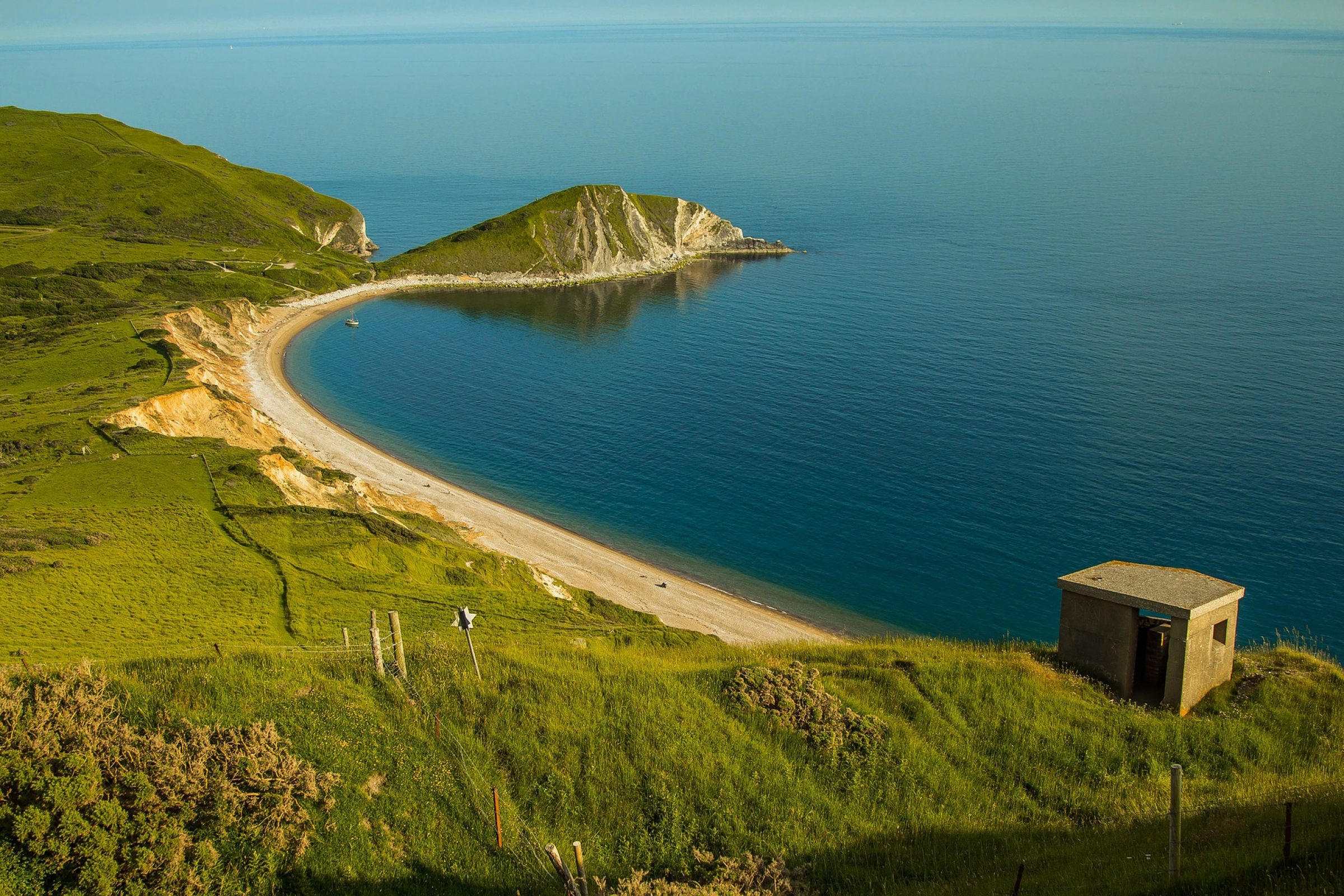 This amazing Dorset anchorage is 15 nautical miles from Portland Marina, a short run for fast motor boats and, with a fair tide, an easy morning sail for yachts. Before you reach St Alban’s Head and its turbulent tide race, curve into Chapman’s Pool, an amphitheatre bay beneath Emmetts Hill and Houns-tout Cliff. In calm sunny weather this is a blissful retreat, where the only sounds are skylarks rising on thermals and the lazy swish of sea on the pebble beach. 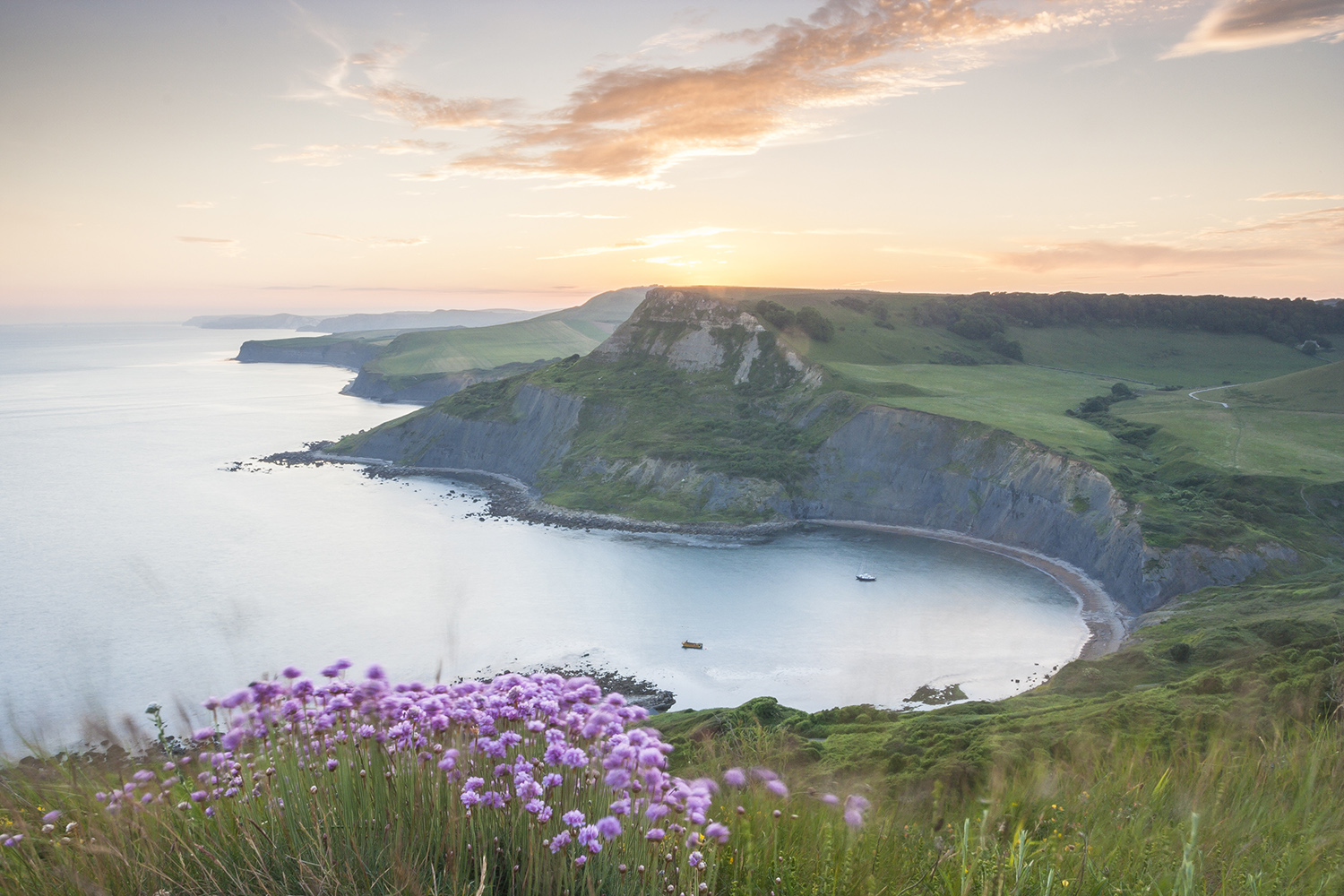 From Portland it’s a short hop round to Weymouth harbour, near the Esplanade and its long holiday beach. Inside the pierheads beyond the ferry terminal, the south bank curves into the picturesque ‘Cove’ and its mooring pontoon. Over on Custom House Quay is the red brick harbour office and a row of waterman’s pubs right up to the town bridge, which lifts every two hours for access to Weymouth Marina.

Moored at The Cove you can watch yachts, motor cruisers and fishing boats coming and going all day. There are good bistros on both sides of the harbour and the friendly Red Lion pub is behind the Cove on Hope Square. 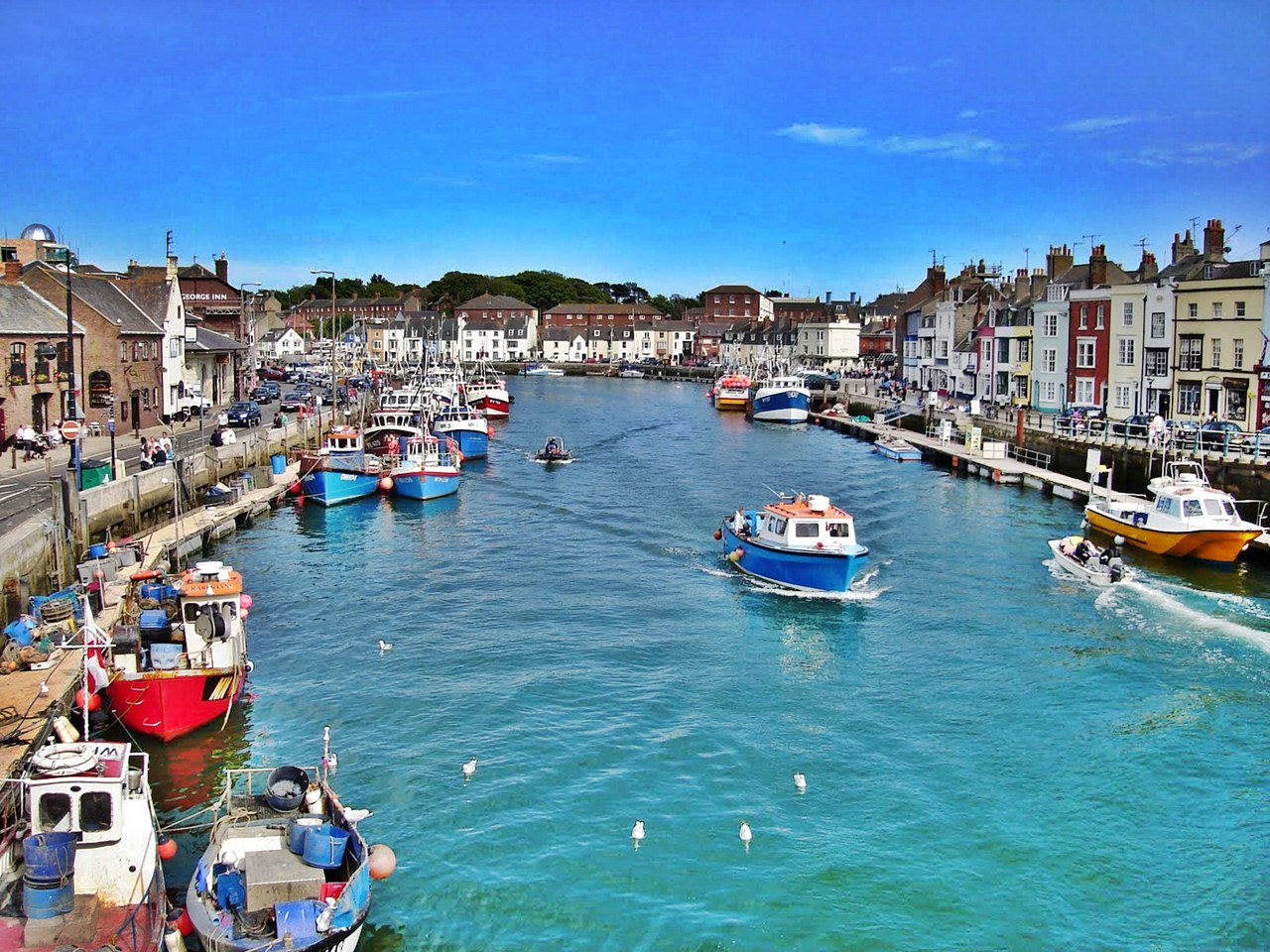 Round to West Bay

More experienced boaters can take the inner passage round Portland Bill, following the east shore of Portland to arrive close off the lighthouse at dead slack water. The mood changes on the west side and the waters feel much more secluded. Then it’s fascinating to hug the coast past the shingle miles of Chesil Beach and the hills beyond Abbotsbury. After two conical peaks near Swyre village, you soon reach the fantastic gold Jurassic cliffs near West Bay harbour. Inside the piers, make for the pontoon on the west side. Then wander up for fish and chips at one of the many kiosks around the inner basin. 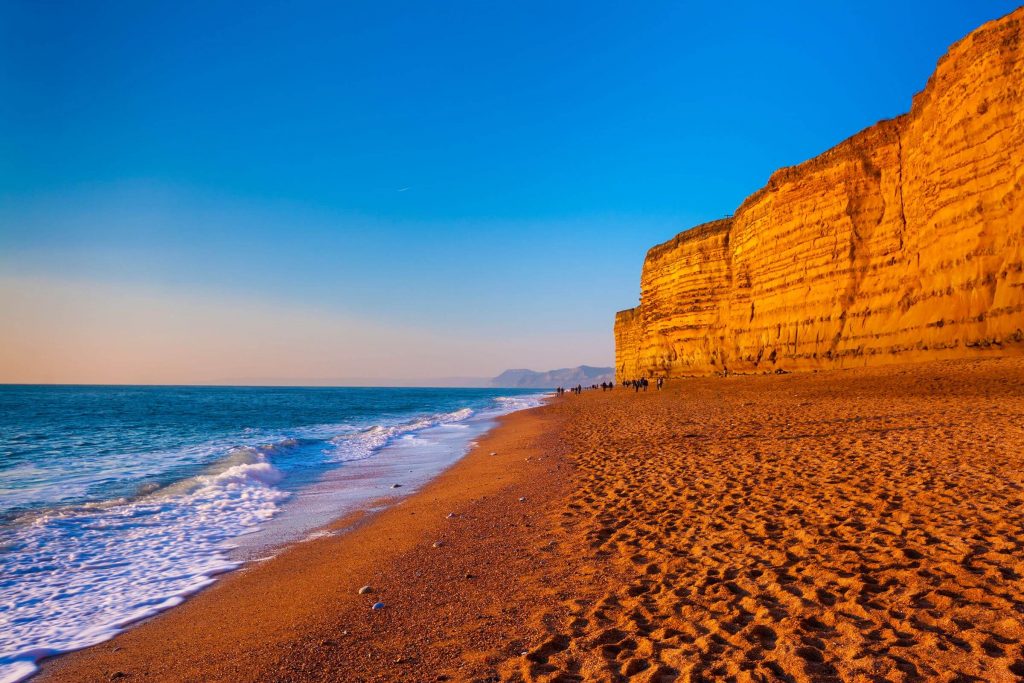 On to Lyme Regis

From West Bay it’s fun to cruise another six miles west to Lyme Regis, whose restful seafront has an attractive backdrop of jumbled Edwardian and Victorian houses winding up the hillside. Although the harbour dries at low tide, you can stay afloat at a seasonal pontoon off Victoria Pier. Stroll ashore past The Cobb, Lyme’s original fish quay with its old sheds intact, one of them now an aquarium. The French Lieutenant’s Woman was famously filmed here, with Meryl Streep gazing forlornly out to sea. Local boats run mackerel fishing trips from the harbour and Lyme has all the nostalgic vibes of a traditional English seaside town. 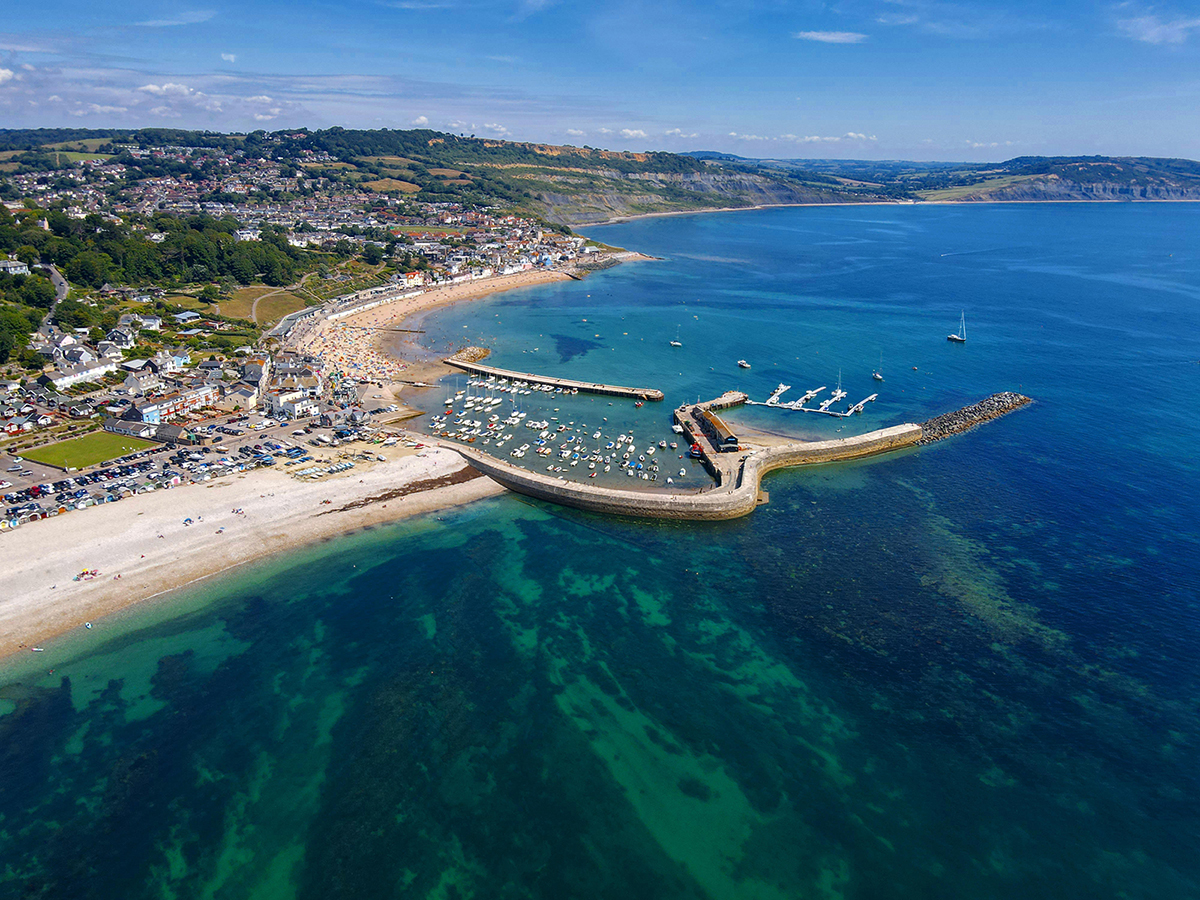 There are many good boating restaurants along this coastline, here is a selection:

West Bay: The Riverside Restaurant serves excellent local seafood and is behind the inner harbour.

Weymouth: Mallam’s is near the Cove and offers first-class meat as well as fish. Perry’s is next door, with harbour views upstairs. Floods is on Custom House Quay, and is a real treat for fish lovers.

FROM THE UK TO THE MED